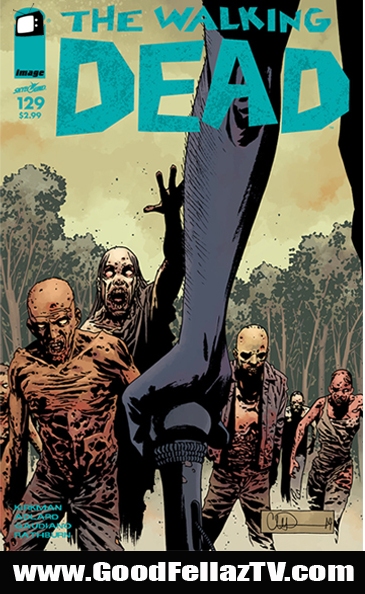 COMIC BOOK NERD ALERT: Check out the cover for “THE WALKING DEAD” #129 published by Skybound/ Image Comics. The synopsis of this issue given by the publishing company simply states that

Even now, they still find new ways to dispose of the dead.”

The comic books, which feature similar story-lines as the TV Show (although definitely NOT the same), currently are in the midst of the “All Out War” story-arch, featuring Rick and the remnants of several survivor groups battling the deadliest “The Walking Dead” villain yet: Negan. The #GFTV “Word-on-the-Street is that Rick’s current arch-nemesis Negan is rumored to be making an appearance on the TV show in the near future, possibly towards the end of Season 5; possibly as the cliff-hanger of the season finale.

Check out the new cover and info on “The Walking Dead” issue #129, courtesy of the good folks at GoodFellaz TV.