Drake Takes-Over NY For His “Nothing Was The Same” 5 Borough Listening Event, Find Out Where On #GFTV

admin September 18, 2013 Comments Off on Drake Takes-Over NY For His “Nothing Was The Same” 5 Borough Listening Event, Find Out Where On #GFTV 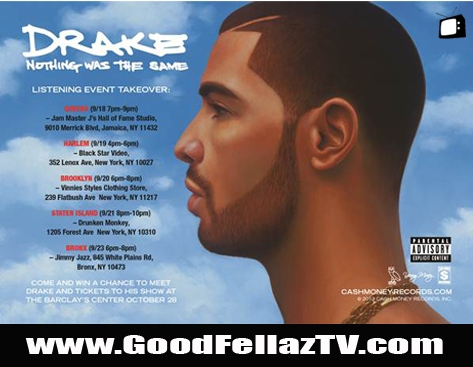 Drake takes over New York! In celebration of his upcoming new album “Nothing Was The Same”, Drizzy Drake will be hitting all 5 boroughs of NY, where he will be holding special listening sessions for the new LP. Wanna know where? Check out the details below, courtesy of the good folks at GoodFellaz TV. Drake “Nothing Was The Same” IN STORES SEPTEMBER 24th on Cash Money/ Universal Records!!

Listen to the GoodFellaz TV “New Heat of the Week” from Drake “Wu-Tang Forever”. This is the newest joint from Drake’s highly anticipated third album “Nothing Was The Same”, due in stores September 24th on Cash Money/ Universal Records.

Drake Responds To Kendrick Lamar In Billboard Magazine, New Album “Nothing Was The Same” Due In Stores Sept. 24th

By now it seems like everybody-and-their-momma has responded to Kendrick Lamar’s verse on Big Sean’s “Control” record, including the likes of Joell Ortiz, Papoose, A$AP Rocky, Joey Bada$$, and even former Los Angeles Lakers coach Phil Jackson. However one of the most prominent artist’s ‘called-out’ on the verse, Drake, has been noticeably silent about the whole controversy; until now.

Drizzy Drake recently broke his silence on the topic during a recent interview with Billboard Magazine, where had this to say when asked about the now-infamous Kendrick verse:

“I didn’t really have anything to say about it. It just sounded like an ambitious thought to me. That’s all it was. I know good and well that Kendrick’s not murdering me, at all, in any platform. So when that day presents itself, I guess we can revisit the topic.”