Drake’s “If You’re Reading This It’s Too Late” Debuts At #1, Will Count Towards His Record Contract

admin February 22, 2015 Comments Off on Drake’s “If You’re Reading This It’s Too Late” Debuts At #1, Will Count Towards His Record Contract

Billboard Charts, if you’re reading this, it’s too late!

That’s right, the surprise Mixtape (really more of a ‘Street Album’) from Drake, which he dropped unexpectedly during NBA All Star Weekend, debuted at #1 on the Billboard Charts last week moving 495,000 copies in only 3 days. Drizzy’s latest project was his forth #1 release, and was released strictly through digital retail. As of yet a physical release for the album on CD or vinyl has not been announced.

Word-on-the-street is that the “If You’re Reading This It’s Too Late” project was originally slated to be released for free via DatPiff.com as a part of DJ Drama’s “Gangsta Grillz” mixtape series, but instead became a ‘retail release’ after urging from the record label, according to Datpiff.com.

DatPiff CEO K.P. had this to say regarding the almost-release of Drizzy’s latest offering:

Originally we were in talks to release it for free…and have DJ Drama host and even make it an official Gangsta Grillz…however the label was not in favor of that and they struck an agreement to release the project the retail route and it would count towards one of his albums. It was a mutual decision since he wanted to give it away. They [the label] said, ‘Hell no,’ not in those words, so they ‘agreed’ to do it this way as a middle ground and it would count towards his Cash Money deal album total. The label had zero input or creative control over ” If You’re Reading This It’s Too Late.”

Rumor has it that with all the label drama between Lil Wayne & Cash Money Records CEO  Baby “Birdman” Williams, the self-proclaimed ‘6 God’ decided to release the new material as a way to fulfill his contractual obligations with the record label.  Drake’s highly anticipated upcoming official album, “Views From the 6”, is scheduled to be released later this year on Young Money/ Cash Money Records.

So on behalf of the GoodFellaz, congratulations to Drake for another #1 project. Salute! 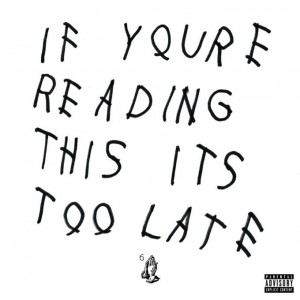