admin May 3, 2011 Comments Off on Lupe Fiasco “Lasers” Album Review 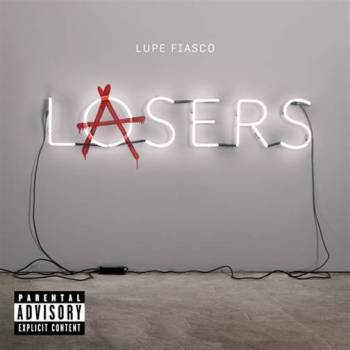 It’s no secret that record labels have a strict policy about the type of music their artists put out during a certain musical “era” (ex: hard core gritty street hip hop, dance & snap, and now whoever has tattoos and a fan base, etc) and chase whatever is hot at the moment. If you don’t fit the criteria of crossover hip-hop/pop and mainstream, it’s more than likely your project will be shelved.

One person has successfully “un-shelved” his project and released a quality album with the help of thousands of his fans. That person is Lupe Fiasco. Lupe’s third studio release, “Lasers”, was fought for through petitions and fans gathering outside of Lupe’s recording home, the offices of Atlantic Records, demanding a release date. Talk about power to the people!

Lupe Fiasco’s third studio album “Lasers” starts off with “Letting Go” featuring Sarah Green, a track that sets the tone for the listening experience of the album with Lupe’s signature flow and wittiness.

“Words I Never Said” featuring Skylar Grey is a song where Lupe takes shots at the politics of our country with lines like “I really think the war on terror is a bunch of bulls**t/ Just a poor excuse to use up all your bullets/…” and “Limbaugh is a racist, Glen Beck is a racist/ Gaza strip was getting bombed, Obama didn’t say s**t/…”. He also talks about the ailing economy with “..Crooked banks around the world, will gladly give a loan today/ so if u ever miss a payment, they can take your home away/”.

“Lasers” progresses with some “compromise” songs neccessary to fulfill the labels want for up tempo crossover songs in “Till I Get There”, “I Don’t Wanna Care Right Now”, and “Out Of My Mind” featuring Atlantic labelmate Trey Songz. Lupe’s gift of word-play still finds a way to deliver great lyrics with substance over the hip hop/electronica instrumentals.

Overall “Lasers” was a great album. It’s not one to compare to his previous two albums, but one to show the evolution and growth of an artist who isn’t afraid to try new sounds and still make the type of music wanted of him by the record label.