admin June 21, 2012 Comments Off on “Bad Girl Of The Month”: Model/Actress Priscilla Rosario 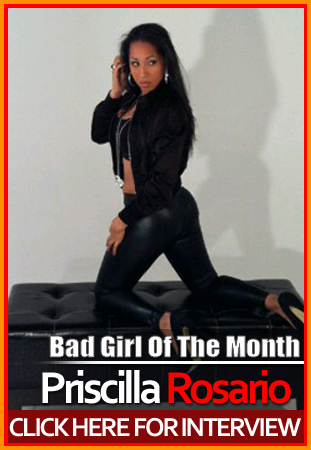 This month’s “Bad Girl of the Month” is the smokin’ hot Priscilla Rosario . Raised in NJ, the super-sexy Ms. Rosario is a triple-threat: she is a Model, Radio Personality & an Actress, and is currently in the midst of wrapping-up a starring role in an upcoming indie-movie.

Recently GoodFellaz TV’s own Tommy Gunz & Big A recently got a chance to sit down with Priscilla at a Panera Bread near-you, where we talked about everything: Why she may be giving up Modeling, her upcoming movie, kissing girls, boxing, her Turn-on’s, and more. Check out her exclusive interview below, only on GoodFellaz TV.

Q: So Ms. Rosario, first-things-first, where are you from ?

Q: We gotta say, you are smokin’ hot! The fellaz across the globe want to know: Single of Taken??

A: (Blushing). Why thank you. But sorry ‘fellaz across the globe’, I’m taken. I have a fiance’.

Q: Well you definitely have an exotic look. Whats your nationality?

A: I am Dominican baby! (fist pumps)

Q: Niiiice. When is your birthday? What’s your sign?

A: My birthday is in July, and it’s coming up soon, so I expect a gift from you guys (laughs). I am a Cancer.

Q: So not only are you a Model and a Radio Personality, but you are an Actress as well. As a matter of fact, you have a couple of big Movie projects coming up soon. Tell us more about that, How did you get into acting?

A: Hmmm, let me see. I got into acting..well actually I started dancing first. But real dancing, not like ‘club dancing’ (laughs). Then I took an acting class during this sumnmer program. I did music theater at first. This film that I’m doing is actually the first time I’ve done acting officially.

Q: Really? So how did you end up getting a leading role in this movie you’re starring in?

A: Well I guess you could say I got the role because I’m nosy (laughs). I was around the movie, and I like boxing, so I started inquiring about things to the producers. And from there I started telling them everything about boxing, when they had certain questions. And as fate would have it, the origianl chick dropped out for some reason, and they asked me if I wanted the part. In the movie the character I play is bi-sexual, so the director asked me if I was confortable with that, and I said “yeah”. And here I am (smiles).

Big A: That’s what’s up!! So you kind of hustled your way into the movie, huh? (laughs). 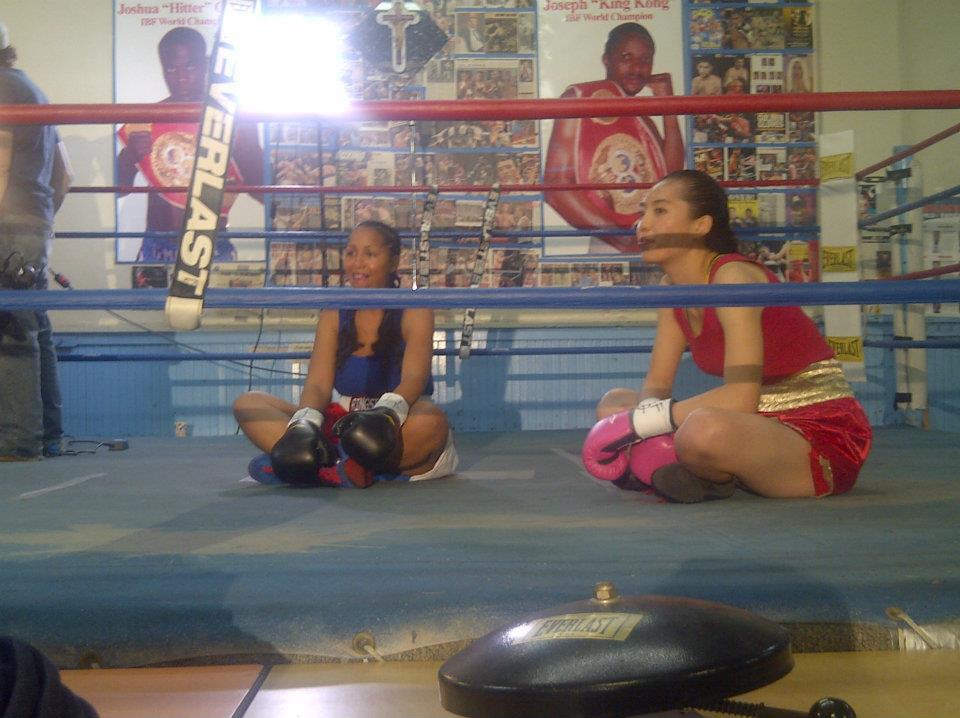 Q: Well this is a movie based on boxing. Do you actually box?

A: Yes, believe it or not I actually box. Well I’ve been sparring actually, I haven’t had a fight yet, but I will soon enough (throws a play-punch). I’ve just been so busy with everything, I just haven’t gotten a chance to focus on a match yet. 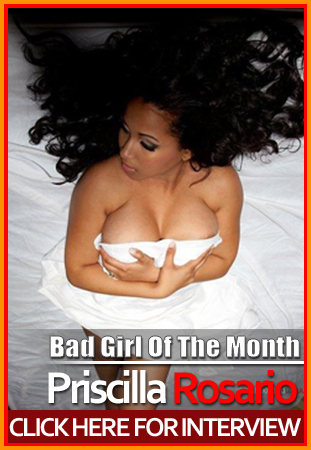 Q: Well speaking of boxing, the Mayweather vs. Cotto match just happened not to long ago. Who did you have picked to win the fight?

A: Come on bro, Mayweather of course (wink). I know I’m spanish, but it’s not about race; it’s about boxing. And oh by the way, Mayweather would beat Paquio too! (Throws a fake job).

Q: So tell us about the movie that you’re starring in. It’s a boxing movie from what we’ve seen.

A: Yes it is. The name of the film is “Split Decision”. I’m the lead character. The movie is about an up-n-coming female boxer who’s preparing for her first fight. The character I play is bisexual; she has a boyfriend and girlfriends (laughs). And there’s a lot of drama between her and her family over her lifestyle.

Tommy Gunz: Damn, she’s got boyfriends AND girlfriends. So you’re like a Bi-sexual pimp, huh? (laughs)

Priscilla: (laughing hysterically) Yeah, pretty much. And the chick that I’m with in the movie is hot too!

Q: So are there any scenes where you’re ‘hooking-up’ with a female?

A: Yup! (laughs). My character hooks up with dudes and chicks actually. 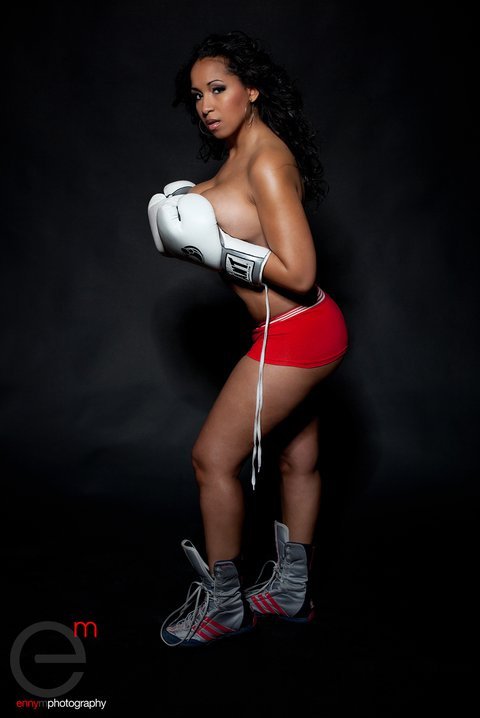 Q: Really?? How was it kissing a chick?? We’re you nervous?

A: Of course you guys would ask me questions about kissing girls, perverts (laughs). Well actually when I had to kiss the chick, I wasnt really nervous at all. Honestly I was more nervous about kissing the dude then the chick (wink).

Q: Speaking of kissing other people on film, how did your boyfriend feel about your ‘love-scenes’. Was there any drama or jealousy, or was he cool with it?

A: My boyfriend is very suportive of everything I do, which is really cool (smiles). 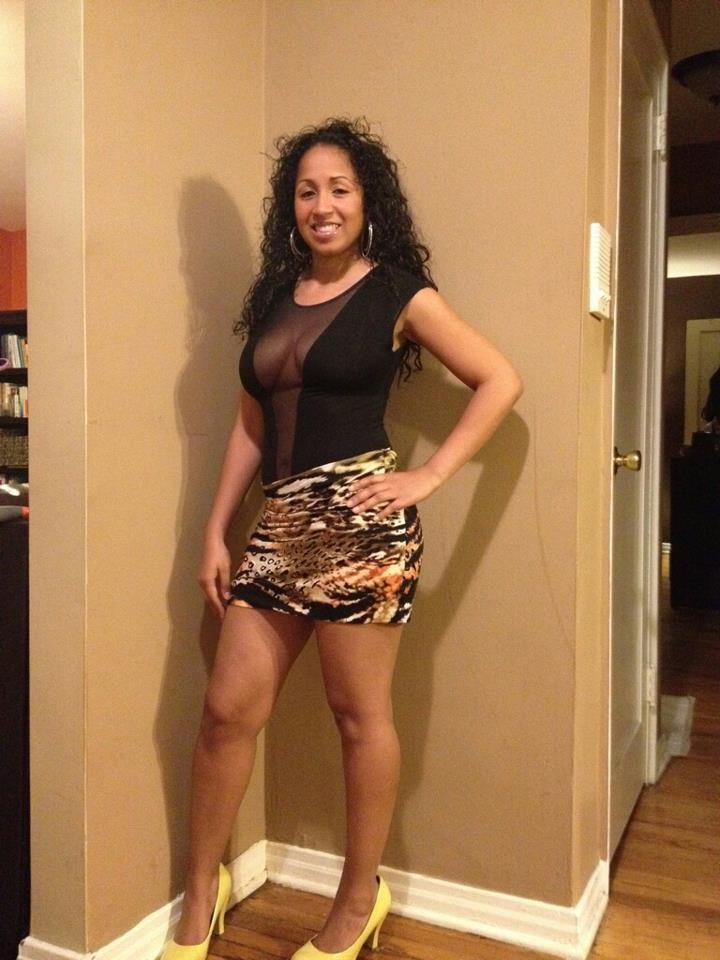 Q: So tell us about the Modeling. Obviously you’re hot, but how did you get into modeling?

A: Hmmm, well I started modeling pretty recently actually, like around last June. It was just something I always wanted to do, Believe it or not, I was kinda scared to do it at first (covers eyes).

So anyway, a good friend of mine, he’s the photographer I work with, told me I should start modeling after I made this ‘sexy calendar’ for my fiance.

After that I started putting up some of my photo-shoot pics on sites like Model Mayham, Facebook, and Twitter, just to promote myself. And after a while people started to reach out to me about working on projects.

Big A: And from there, you became a model, huh?

Priscilla: Ehhhh, to tell you the truth, being a Model is ‘whatever’ to me. Honestly I’m not really a big fan of the modeling. Yeah there’s money in it, and it’s not that I feel uncomfortable doing it, it’s just that I always saw it as more of a stepping stone then a career. I don’t wanna get stuck being ‘A Model’ forever, you know. Plus I have a daughter, so I have to be a role model (smiles). 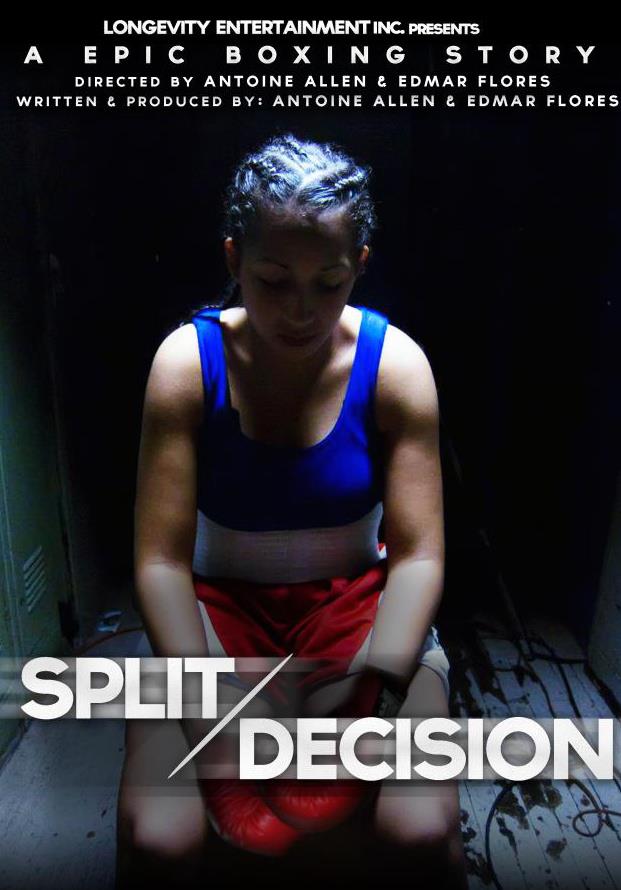 Tommy Gunz: No doubt, that’s a real answer right there. So switching gears for a minute, do you drink? What’s your drink of choice?

A: Believe it or not, I don’t drink. Shhhhhh (laughs).

Priscilla: (laughing) Nope, no drinking for me. I am drug and alchohol free (fist pumps)!

Q: Lets talk acting. What’s your favorite part of being an actress?

A: You get to be somebody else. I like that. You get to express yourself. Funny thing is, the character in the movie is kinda similar to me.

Tommy Gunz: Ahhhh I knew it, so you do like kissing girls then (laughing). 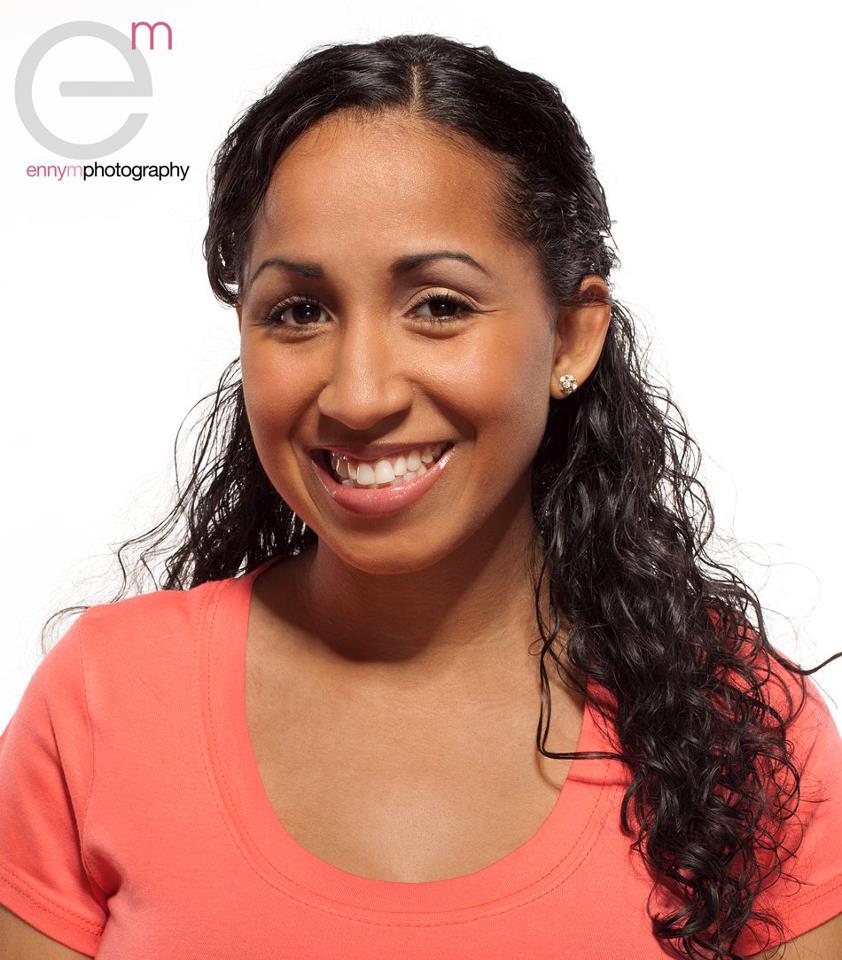 Priscilla: No silly, not that part (laughing hysterically). But it is really cool to play a totally different character. It’s a rush for me to be somebody else, and to be placed in situations I normally never would be involved in. That’s my favorite thing.

A: I want to do film. But a little secret of mine is that I really want to do Broadway (smiles). I can’t wait to do this ‘off-Broadway’ project I’m about to start working on. There’s just something about Broadway that I love. 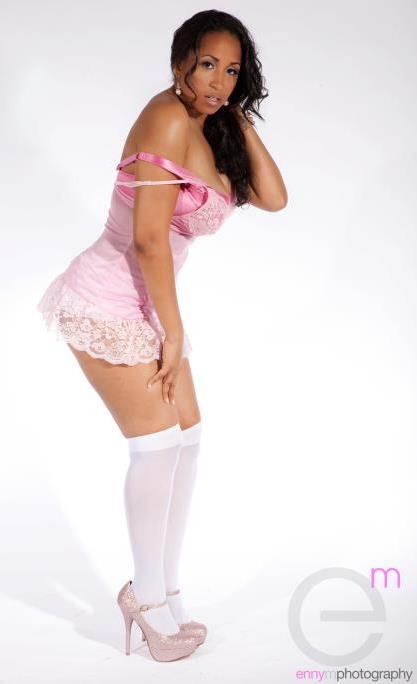 Q:What type of music do you like? Hip Hop? Spanish?

A: Music wise, I like Spanish music. I like a lot of different types of music. I’m really not into rap honestly, although I like some of the older stuff, old schoool. I think a lot of the newer hip hop out today is garbage. Rap-wise I like T.I., and Drake, even though he’s starting to get a little annoying these days. I used to like Nicki Minaj too, her older stuff.

Q: So what are some of your Turn-On’s when it comes to the Fellaz?

A: Wow, my turn-on’s, let me see (smiles). Believe it or not I like small guys, I don’t know why, I don’t really like tall guys. What else? Well I like a guy that can make me laugh. If you can make me laugh, that’s definitely a turn-on. A guy has gotta know how to dress, and he’s gotta have Swag. Also he has to keep a good convo too, there’s nothing worse than a boring guy (rolling eyes). 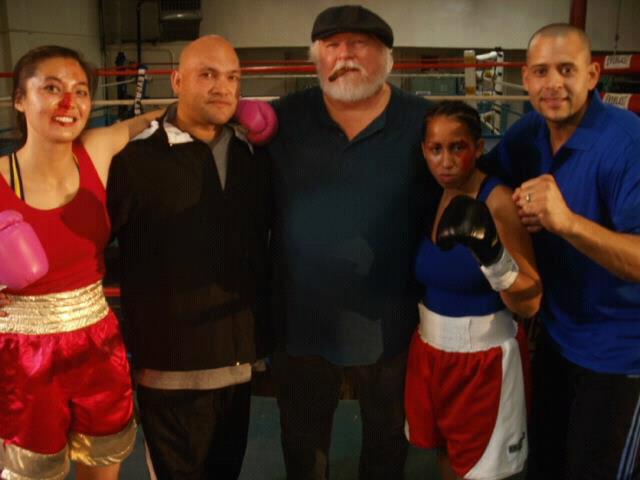 Q: No doubt, so what are some of you Turn-off’s?

A: Haha, I can’t live without my phone. Just the other day I was missing my phone for like the whole day and I almost died (laughs). 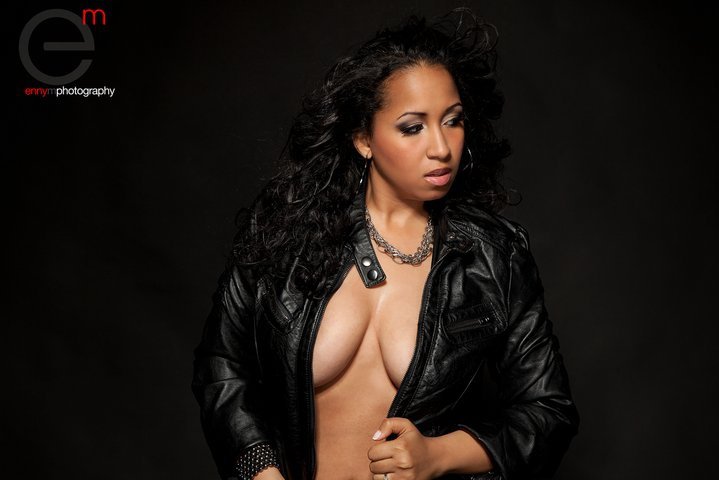 Q: Well we know you’re ‘wifed-up’, but who would your Celebrity Crush be?

A: Wow, what a question, let me see (blushing). I guess my celebrity crush would be T.I., there’s just something about T.I. (smiling). Oh and Ice-T’s wife Coco (laughing). She would be my female celebrity crush.

Tommy Gunz: Haha, there you go with your female crushes again, let me find out (laughing).

Priscilla: Oh Shut up you (laughing).

Q: So the fellaz want to know, which do you prefer: Boy-shorts or Thongs?

A: Boy shorts. A wife-beater and boy-shorts is very sexy to me.

Q: We agree (laughs)! So Fashion-wise, what’s hot for the ladies right now?

Q: So what’s NOT a good look for the ladies, fashion-wise?

A: Where do I begin (laughs). Uggs are not a good look, especially the ‘beat-up’ looking Uggs. Chinese Slippers are not a good look to go out somewhere in. And I guess clothes that don’t fit you pretty much. Come on ladies, if your shirt is 3-times to small, it’s just not cute (laughs).

Q: Do you have any Tatoos?

A: Ummm, no Tattoos. Tats are cool, but they just aren’t for me.
Guys wit tats are ‘whatever’. It’s not a big deal to me. I don’t like guys that are covered with tats though.

Q: Are you more of a Party-girl or Homebody?

A: Haaaaa! I’m definitely a Homebody. I don’t really party too much, only if it’s business and I have to go out for an event. 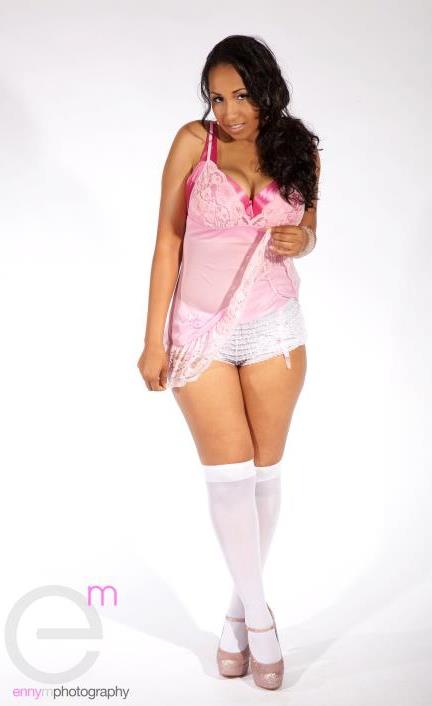 Q: So what advice would you give to any aspiring Actresses looking to get in the game?

A: My advice would be to go hard. Be sure that it’s something you wanna do. Because once you’re in it, there’s no turning back. Dive into it full force, because you don’t know what type of opportunities could come from the moves you make. Take as many acting-classes as you possibly can. And of course, do your research.

For more on the “Bad Girl of the Month” Priscilla Rosario, check her out online at:

For more on her upcoming Movie Project “Split Decision” check out the website below: