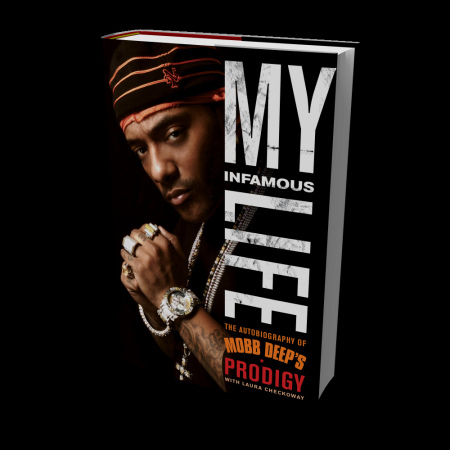 Recently Prodigy of Mobb Deep was in Brooklyn, NY for the book release of his autobiography “My Infamous Life”. This was one of Prodigy’s first public appearances since being released from his 3 year jail sentence. During the course of the event he was being interviewed by Toure of “Rolling Stone Magazine” and Fuse TV’s “Hip-Hop Shop”. During the interview Prodigy talked about subject matter from his book including his early childhood, dealing with Sickle Cell Anemia, how he almost had Jay-Z beaten up and his alleged sexual encounters with Lil Kim & Lindsay Lohan. After the interview I chopped it up with Toure about the interview he conducted with Prodigy. Toure remarked that Prodigy always does great interviews, and that he’s enlightening and intelligent and always tells a great story, similar to his rhymes.

After the interview I brought Prodigy’s autobiography “My Infamous Life”, and if you’re a true Mobb Deep fan or Hip-Hop fan in general, this book is well worth the money. There were a lot of things about Prodigy revealed in this book that I didn’t know. According to the book, Prodigy lived the hood lifestyle growing up in Lafrack City, Queens, where he had to rob people to make end meet. The most interesting part of the book was learning the instrumental role Q-Tip (from A Tribe Called Quest) played in Mobb Deep’s career. According to the book, when Q-Tip heard Mobb Deep’s demo, he got them a meeting with Russell Simmons and Lyor Cohen at Def Jam Records. However Lyor Cohen’s didn’t want to sign Mobb Deep because he didn’t think teenagers making hard-core hip hop could sell.

Overall, this book is an amazing read. Prodigy details his life very vividly, especially regarding his time spent in the penitentiary. The book details subject matter including beef with 2pac, Jay-Z, and shockingly with fellow Queens residents Capone N Noreaga. He even goes as far as to call Capone a snitch for testifying against Havoc’s Brother.  For more details, make sure you pick up Prodigy’s “My Infamous Life”, IN STORES NOW !!