I have always said that in order for a concert to get a Perfect-10 rating, the artist has to be willing to bring out multiple artists, as those who go to many concerts will know; there is no reaction quite like a surprise reaction.

However, for some artists….it’s just different.

As was the case for the highly awaited G Shock Anniversary Concert (Aptly named “Shock The World 2013”. This has been happening once a year for quite some time now, and is HIGHLY exclusive to get into. Not to worry though, with every passing year, it seems like more giveaway and concert companies are being added on to promote this secret show, giving you more chances to win.

Anyhow, when it was announced Eminem was not only performing, but was returning (last year’s Shock the World featured Slaughterhouse, to which Eminem made a surprise appearance), you can imagine the frenzy it caused. Em usually sticks to the single digits in the amount of shows he does a year, if he does them at all. 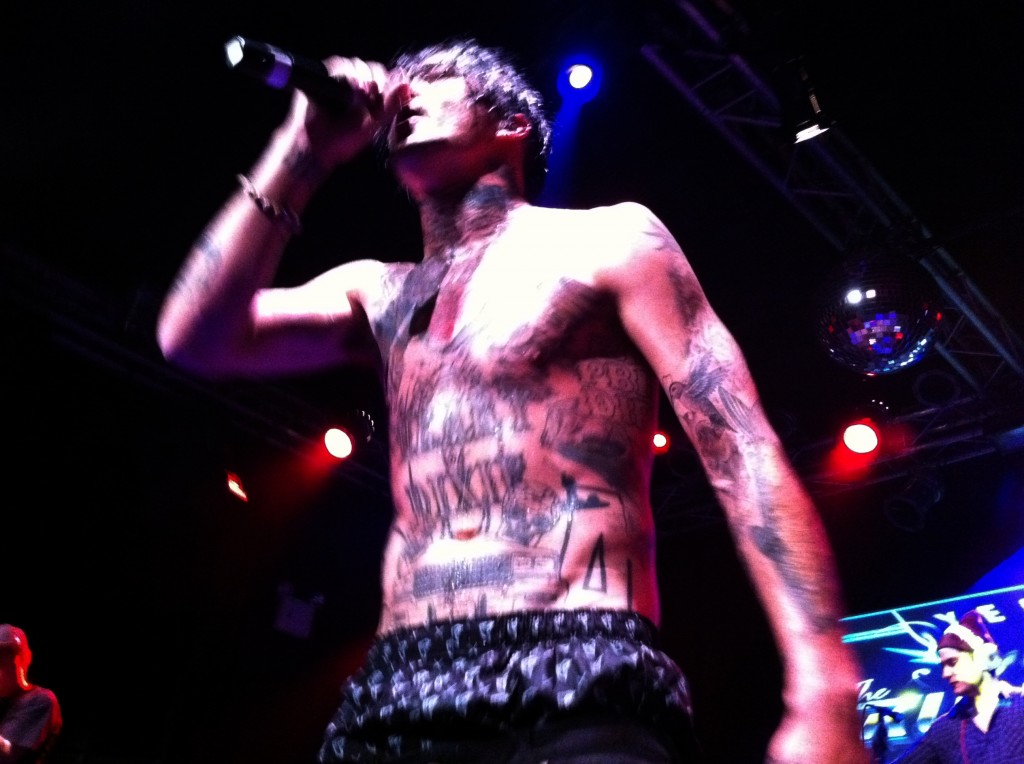 Once the stage was set up and everything ready to go, Yelawolf opened the show first, hitting the crowd with “Daddy’s Lambo”, “Pop The Trunk”, “Good To Go”, and “Marijuana” among many others. In a crowd that was ALL Eminem based, I could easily tell that very few people knew anything about Yela other than that he was a part of Shady, which made it all the more dope to see people bugging out to songs they didn’t even know. Yela can perform his ass off, and the way he acted, I prepared myself for a stage dive at any moment (Thankfully didn’t happen). He made a LOT of brand new fans last night.

Then came the moment everybody was waiting for. The stage darkened for the second time, the lights hit, the band started up, a huge monitor displayed all types of graphics above them, and then out walked Em from stage left. Most artists start out with the slower material and build up to their hits, but with a catalog like Em’s, there isn’t really time to waste.

Immediately starting out with 2010’s “Won’t Back Down”, and then 2009’s “3AM”, his presence was undeniable. As Em touched on every era of his music, with “Stan”, “Criminal”, “Forever”, and “I Need A Dr.” among others, we all wondered when the big reveal would be. Even the guest surprise of Royce Da 5’9 during “Lighters” couldn’t hide the speculation and wonder that Em would be performing brand new material for the first time. However, 18 songs later, “Not Afraid” hit, and the show began to wrap. Em walked off the stage to loud chants of “Shady”, “Encore”, and “One More”.

Could I really say I was disappointed? Could anyone else? After a bit of research, I believe this might be Eminem’s first appearance in NYC since the “Home and Home Tour” at Yankee Stadium, so does anyone really care that the rumors weren’t true? Let me just leave the thought open to debate, but I will say this as a final thought on it: The ONLY thing bigger than a surprise guest at such a monumental show is surprise music.

Anyhow, all was (quickly) forgiven when Em returned to the stage and “Lose Yourself” hit, arguably his biggest song ever. It was amazing that if you cut the music completely, and Em just stopped rapping, the ENTIRE crowd would continue to rap every word like a mesmerized chant. It was that powerful of a moment. Finally, when Marshall Mathers said “Thank you New York”, and we knew it was really over this time, no one could say an actual word, but cheered REALLY loud. So much so that I have NO idea who the band members were, as their introductions were COMPLETELY drowned out by the final roar of the crowd. Guess who’s back? 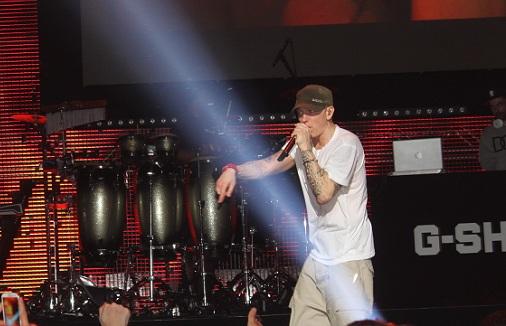 9.5 (Yelawolf): Ironically, I am taking off half a point not for him, but for the crowd. If you are going to see Yela, you gotta see him with a crowd that appreciates him to get the full aspect of just how crazy his shows can really be.

9.5 (Eminem): As much as I am dying to give this a perfect 10, that “rumor” of new music was echoed by nearly every major Hip Hop Web Site, Gossip Site, and was Universal to the streets to anyone that knew it was happening.

Venue Rating: 10. “Basketball City” in downtown New York isn’t even a concert venue to begin with. So to transform it into that level of concert, complete with red carpet, carpeted floors, and full soundstage, complete with a team that was able to break down what started off as a press conference into an open concert space in less than an hour? Impressive.

Do It Again?: Do you REALLY need to ask??

Next Performance in Tri-State: No one knows……yet. Stay Tuned to #GFTV and #JMN for updates!!