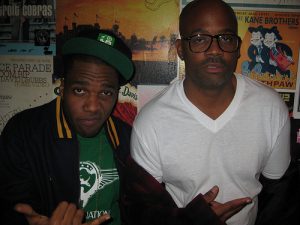 It looks like Dame Dash just can’t catch a break these days. Word-on-the-street is that rapper Currensy is suing his once-partner Dame Dash, the troubled co-founder of Roc-A-Fella, for around $1.5 million.

Currensy (aka Shante Scott Franklin), who has his own popular brand Jet Life Records, hit Dash with the lawsuit for allegedly releasing his music without permission or any compensation. According to sources within both camps, Dame Dash and Currensy were in the midst of negotiating a record label deal back in 2010. Word is, the deal fell through between the two, and the New Orleans MC ended up signing a deal with Warner Brothers Records instead. However Dame Dash still went on to release Currensy’s cult-favorite albums “Pilot Talk 1″ & “Pilot Talk 2” through his own imprint on Universal Music anyway.

When asked recently about the allegations, Dame Dash responded by claiming he still had the rights to release “the albums in question because he was given permission.” The Rocafella co-founder also stated that Currensy ‘played him’ by “reneging on their agreement and signing instead with Warner Bros.”

Stay tuned to GoodFellaz TV as more details emerge regarding the dispute, and check out recent footage of Currensy performing in NYC, courtesy of the Bad Guys!!