There is a great freemium game for smart-phones and tablets called “Clash of Clans”.  In it, you can unlock your inner-warrior and raid villages.  The game is set during the medieval age, judging by the weaponry and the imagery.  You have to constantly train troops, upgrade your materials, characters, and set up your village in a way which makes it difficult to invade your village.  The game is a big lesson in strategy.  You have to stage attacks which require you to have an intimate knowledge of your character’s strengths and weaknesses, as well as that of your opponents, usually who are chosen randomly.

The character selection is important in this game.  The Barbarians just spawn and wreak havoc.  They attack anything that is in front of them, and are faster than the Giants.  They make up a high portion of any army, as they don’t cost a lot to make, and are efficient.  The Archers are good for long-ranged attacks.  They’re great to attack from a distance, and if positioned correctly, can cause a great deal of damage to an enemy without being hurt.  However, the archers cannot handle a lot of damage. The Giants are great for the purpose of neutralizing an opponent’s defense.  They deliver huge blows to cannons, archer towers, wizard towers, mortars, etc.  However, they are extremely slow.  There are many other characters, but these are the core of your army. 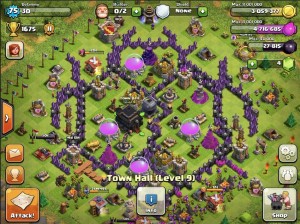 As is football, defense wins game, or in this case, trophies.  Make sure you have your resources, town hall, cannons, towers, and walls set up in ways that will evade attacks that will deplete your gold and elixir.  You can use your resources to bait your opponent to attack them while in range of some serious firepower.  While you’re getting robbed, you can deal a great amount of damage to invading hordes of troops.

Another neat feature about “Clash of Clans” is Clan Wars.  You can join a clan, and engage in wars for gold and elixir.  You can communicate with members of your clan to arrange strategies and send each other troops to aide in the war.  At the end of the war, whichever team ends up with the most stars wins.  All this while gathering your own resources and upgrading your village and it’s many components.

“Clash of Clans” is a game interesting enough to keep you on your device for hours at a time.  Especially if you are not online, nor have a shield, because your village can be attacked and robbed blind.  However, even then, you have the option of getting your revenge. 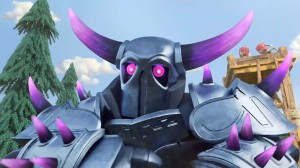