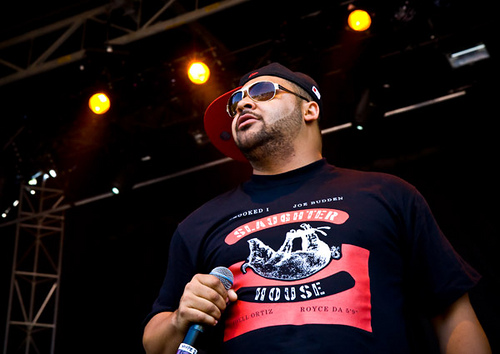 It didn’t take long for somebody to respond to Kendrick Lamar’s verse on Big Sean’s new song “Control”. Listen to Bronx emcee and Slaughterhouse-member Joell Ortiz’s crazy new freestyle “Outta Control”, which he debuted on the “Funkmaster Flex” radio show, and takes aim at Kendrick Lamar and his claim to be the ‘King of New York’. Check out the freestyle and lyrics below, courtesy of the good folks at GoodFellaz TV.

“I ain’t even got to give this too much thought

This ain’t no different, I’m listening, you the King of New York?

Little homie you ain’t the king of New York

You the next thing on my fork

The messenger with all them rings on that horse

And fall into a bottomless pit

Homie, you know how many bodies that fit?

When we met you said, ‘It’s an honor man, the Yaowa can spit.’

Maybe that’s why you left me out of that shit

Maybe that’s why the Slaugtherhouse ain’t get dissed

Or maybe I’m not on your radar, you feel you ain’t gotta acknowledge my clique.

Either way I person train this beat, it got to get ripped

So zip it, I got this shit real hip-hop in this bitch.

The apocalypse has fell upon us, watch the zombies I split

The walking dead, I’ve been a monster shorty, I can get bit

And then return, I’m immune to these rappers ya’ll calling sick

I stomp the red carpet holding my dick

Then stand up and scream, ‘Yaowa,’ then dip and smack a legend on the way out of that bitch ’Cause I don’t big up the elite

The elite can get it too, ya’ll all fit under my feet

Ya’ll all victims, all chitlins when a nigga trying to eat

Anybody can get it, old nigga, new nigga

Him nigga, you nigga, one nigga, two niggas

A few niggas, I do niggas harm with these bars

It was brave, you took a chance like Monopoly cars

But that telly you trying to to check in, boy that property’s ours

Can’t get a W on Broadway, I’m New York all day

Yeah that’s where the boy stay, don’t you hear that? Oy Ye’

A hundred ‘Ricans running at you, chief like a..

Last time in Compton I was kicking it with Jorge

I rock with some cons out West like the boy ‘Ye

But I don’t claim king, even though my name ring

And I had China in the bay, we call it Beijing

Rodeo to ‘Dego they telling you the same thing

Chico be in Sacramento so much he can claim king

But that’s the West Coast, I’m from this coast

I’ll leave the king of L.A. to Dre, I was this close

But Dre, you a fucking gangster and … you’re such a sweetie

And guess what? I’m a free agent again if ya’ll ever need me

But back to these bars, I’m hungry, this beat is going to feed the needy

I look at it like granny’s ‘ziti, zucchini out in Tahiti

On Fiji, with Erykah Badu’s booty in a bikini

I ain’t a rap nigga, I’m a nigga that rap

Before this, I sort of cyphered, I ain’t bringing that back

With the universe on my back, your human verses is wack

I grab my extraterrestrial testicles when I rap

And tell the earth suck it, tell the planet try it

I love competition, constructing the composition of destruction

Putting Destructicons in the composition

You going to learn, the inferno scorch up on fire”