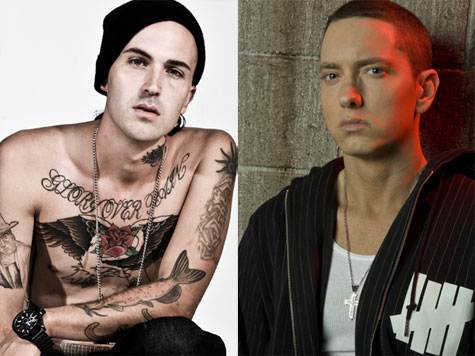 Recently Eminem, who just started his official Twitter account, decided to use the social network to interview his newest signee to Shady Records, Yelawolf, whose new album “Radioactive” is now in stores. Check out the Twitter-interview below, courtesy of the good folks at GoodFellaz TV.

Eminem: Where you at celebrating the release of #Radioactive ? U are a true fan. How’s it feel to finally have #Radioactive out there?

Eminem: Ok white dawg. So when did you start recording #Radioactive ?

Yelawolf: In Vegas about 10 months ago, in January. Then I played it for you later that month. We had about 12 keepers.

Eminem: Sure did. What song from #Radioactive is your favorite?

Yelawolf: Today, its “Hardest Love Song”. I played it live with a band rehearsing for the ‘Jimmy Kimmel Show’… sounded saucy.

Eminem: Really? Why is that your favorite?

Yelawolf: Well it varies from day to day, yesterday I was on “Gutter” all day… It was raining and I was on some dark shit.

Eminem: Who or what inspired you the most while recording #Radioactive ?

Yelawolf: Man… I just used the people around me… every one who was involved… and of course life experience.

Eminem: Why did you call it #Radioactive ?

Yelawolf: Its the fall out to my journey so far. The #Radioactive material that came after the war. The uphill battle to get here……My science experiment gone right.

Eminem: Now they said to ask some stupid ones. Batman or Superman?

Yelawolf: If I had to pick, Batman. But my uncle Critter could kick both their ass in a single bound & shot gun a beer at the speed of light. BAMA!

Eminem: R u going to the mall later?

Eminem: If u could play #Radioactive for any person in the world, who would it be?

Yelawolf: That bitch ass motherfucker who threw my demo at my feet from his car window in 05… I was holding my 1 year old son……now my son is 7 and he’s got anything he wants. Thank you Marshall. 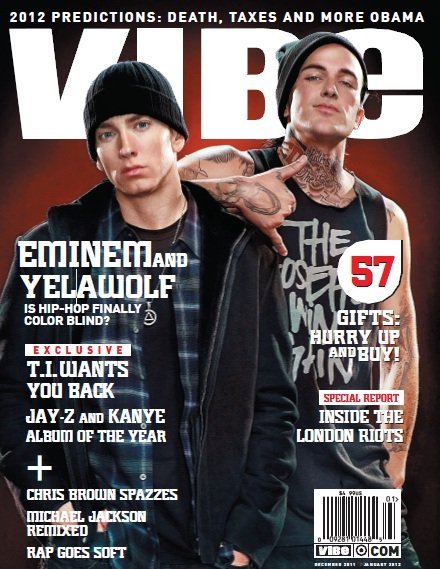