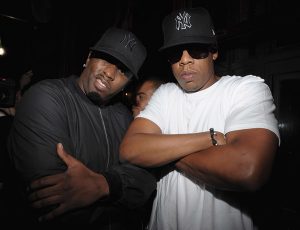 Here is the list of the Top 5 Richest Hip Hop Artists according to Forbes Magazine, as determined by net worth. Sean “Diddy” Combs top this list at $475 million due to revenue generated from his Sean John clothing line, his Bad Boy Record Label empire, and most significantly, his Ciroc vodka brand.

Jay-Z comes in at a close #2 with over $450 million in total revenue from selling over 50 million records worldwide, as well as his Rocawear clothing line, other music-related earnings and his lucrative advertising empire.

Super producer/rapper Dr. Dre comes in at #3 with over $125 million, generated from his own album sales as well as those of legendary protégés Snoop Dogg, Eminem, and 50 Cent.

Curtis “50 Cent” Jackson is tied with Bryan “Birdman” Williams for the final two slots, each grossing over $100 million. 50 Cent earned his vast fortune from album sales, and most significantly, from his Vitamin Water deal. “Birdman” generate his riches through album sales from his extensive Cash Money Records catalog, and his current ventures with hip hop superstar Lil Wayne.