Gas To Be Rationed In NJ Starting Nov 3rd ?? Find Out The Details On Goodfellaz TV

admin November 2, 2012 Comments Off on Gas To Be Rationed In NJ Starting Nov 3rd ?? Find Out The Details On Goodfellaz TV 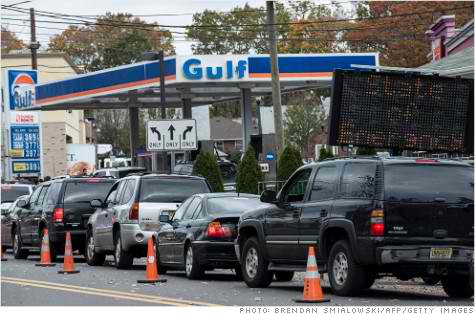 In an effort to help reduce the now-infamous ‘gas-lines’ that have sprouted up throughout the Tri-State, gas will now be rationed beginning Noon on Saturday Nov 3rd in New Jersey. Late Friday night Nov. 2nd New Jersey Gov. Chris Christie ordered gas rationing in 12 counties, declaring that the current gasoline shortages, and the often unruly lines of vehicles waiting for gasoline, could endanger public  safety and welfare.

Drivers in these counties whose license plates end in even numbers can fill up only on even-numbered days. Odd-numbered plates (which includes license plates NOT ending in number), can only fill up on odd days, similar to the infamous restrictions once placed on motorists in the late 1970’s due to the oil-embargo.

The order states that stations “will be required to only sell motor fuel for use in a passenger automobile bearing license plates.” That could ALSO mean that gas station attendants could refuse to sell to pedestrians seeking to fill containers as well.

So far this is ONLY taking place in New Jersey. Stay tuned to GoodFellaz TV for more details on this story.