admin April 11, 2011 Comments Off on Lupe Fiasco Performs In Brooklyn 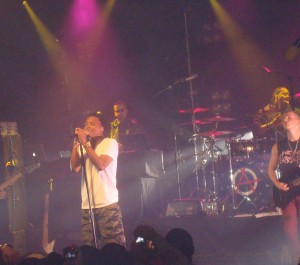 Recently Lupe Fiasco performed at the Williamsburg Music Hall in Brooklyn, NY for his Secret “Lasers” Album Release Concert. And of course, the good folks at GoodFellaz TV were in the building. The line literally wrapped around the block, full of eager fans patiently waiting for a chance to listen to new music from Lupe’s third release “Lasers”.  The crowd was a diverse mix, from hipsters to hip-hop heads straight off the block.  The entire venue was packed from wall-to-wall, with screaming Lupe fans waiting for him to take stage.  And once Lupe Fiasco came out he ROCKED…literally !!

As Lupe ran out to the stage to the sounds of “Shining Down”, the original first single off the long-delayed “Lasers” album, the crowd went insane. He had a live band that brought a real Rock-feel to the performance, blended nicely in true hip-hop fashion. He performed previous classics including “Kick, Push”, “Superstar” and more, as well as new tracks including “The Show Goes On” & “State Run Radio”. Lupe Fiasco’s energy was crazy during the entire performance, he rocked-out on stage as if it was an actually rock-n-roll concert. The GoodFellaz unanimously agreed that this concert was one of the best we had seen in quite some time.

Lupe Fiasco’s new album “Lasers” debuted as the #1 Album in the Country on Soundscan with over  204,168 albums sold in its first week, a very respectable number’s in the current hip-hop climate. Check out exclusive footage from the Lupe Fiasco concert below brought to you by GoodFellaz TV, as well our “Lasers” Album Review. Support good music, make sure you pick up the new album Lupe Fiasco “Laser” today, because the GoodFellaz SAY SO !!! 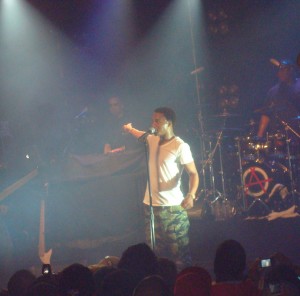