Comic books fans rejoice! You know the good folks at GoodFellaz TV got the inside scoop about the upcoming Avengers Movie, due to hit theaters everywhere May 4th. A member of the GoodFellaz staff was able to sneak into the advanced screening for the Avengers, and we bring to you the official GoodFellaz TV SPOILER & MOVIE REVIEW!! Check it out below.

#GFTV SPOILER #1: The major villains of Avengers Movie are Loki and the Alien Race the Chitauri.

#GFTV SPOILER #2: The Cosmic Cube is a major part of this movie.

The film opens at a SHIELD secret base where they are experimenting with the Cosmic Cube, (the super-powerful device which we last saw in the “Captain America” Movie), and there is a problem: it is apparently out-of-control. The Cosmic Cube ends up opening a door to another dimension, where we happen to see Thor’s evil half-brother Loki, plotting with members of an alien race called the Chitauri. Loki comes through the inter-dimensional portal created by the Cosmic Cube and starts kicking some major SHIELD ass. He proceeds to use his magic powers to mentally enslave several key characters including super-archer Hawkeye and scientist Dr. Erik Selvig (from the “Thor” Movie), and then steals the Cosmic Cube. 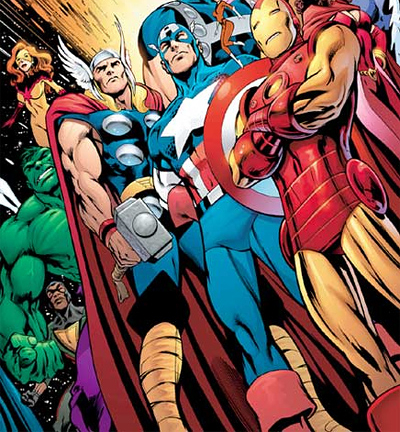 Nick Fury attempts to pursue Loki and the others during a dope chase sequence, however they escape. They then begin to work on a way to open a more stable doorway using the Cosmic Cube, in order to bring the alien Chitauri army through to invade and conquer the planet. To stop this, Nick Fury then begins to assemble a group to help protect the earth and defeat Loki: The Avengers. He begins by recruiting various super-powered individuals. Bruce Banner aka The Hulk is brought in as an expert on the Cosmic Cube’s gamma radiation emissions, Captain America, is more than willing to be the soldier. SHIELD agent Black Widow is busy trying to find her partner Hawkeye. And Tony Stark, who recently moved to NYC, is eventually brought into the fold as well. They join together in order to pursue Loki, who they eventually find and manage to capture.

Just at that moment however, Thor shows up. Thor, who also has been searching for his evil half-brother, is intent upon bringing Loki back home to Asgard. So of course the heroes end up clashing, and there are some awesome fight sequences between Captain America, Thor, and Iron Man, before they manage a truce. Of course Loki eventually escapes, and the Avengers finally assemble, just in time to stop the alien invasion led by Loki.

THINGS TO LOOK FORWARD TOO:

–       Captain America joking on his own constume

–       Bruce Banner revealing how he controls The Hulk

This was an awesome movie from start to finish. Each character gets several jaw-dropping chances to show off their skills, and there are some great team-work action scenes as well. The director Josh Whedon does a great job of balancing the plot, character development, and the intense action sequences. The storyline is actually funny, with numerous little jokes thrown-in the mix. The acting was on-point. Each actor did a good job making their character appear believable, and there was a great chemistry between the different heroes. In particular Robert Downey Jr. was excellent as the charismatic Tony Stark/Iron Man, Scarlett Johanssen made a great Black Widow, and  Mark Ruffalo might have been the best Bruce Banner/Hulk thus far. And speaking of The Hulk, this movie finally got him right; the special effects were on-point and they made The Hulk look waaaay more realistic and believeable than in previous films.

#GFTV SPOLIER #4: Stick around after the credits for a sneak peak of Avengers Part 2

Good storyline. Great acting. Awesome action sequences. The Avengers just might be the Movie of the Summer!!