admin May 6, 2011 Comments Off on “Thor” GoodFellaz TV Movie Review 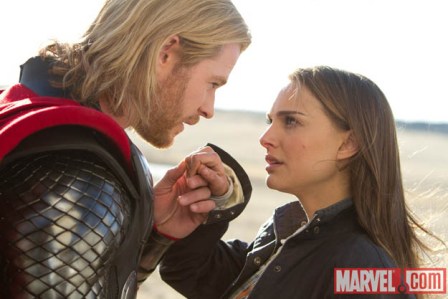 So, I went to go check out a midnight showing of Thor at the IMAX 3D in New Brunswick for my birthday last night. The theater was pretty packed and I was excited to see if this movie was going to live up to everything I had been reading about it for the last few weeks. Critics were saying it was the best Marvel movie to date, which I find that hard to believe, since Iron Man 1 is still sitting on the top of the Marvel Movie world in my opinion. I’m going to approach this review a little differently, and break it down like this:

The casting was great. Actor Chris Hemsworth nailed Thor’s character. Just Robert Downey Jr WAS Tony Stark.  I couldn’t see anybody else playing the part of Thor but Chris Hemswoth. He totally nailed the arrogance and pompous swag of the comic book character, and at the same time was able to pull off the emotional aspects of the role as well. The casting of Natalie Portman (Jane Foster), Anthony Hopkins (Odin) and Tom Hiddleston (Loki) were spot on as well, as everybody played their roles to perfection. Acting wise, there was no weak link in my opinion.

I was initially worried, since all the other Marvel movies try to stay based in reality, how they were going to do Thor’s story in a semi believable way where you could see him with the Avengers. The screenwriters (Stentz and Protosevich) did a decent job of using science to give an acceptable explanation as to how Thor could travel between Earth and Asgard, so that was cool. Also Asgard itself, especially in 3D, was done well and the battle scenes were executed excellently courtesy of  Director Kenneth Branagh.

The relationship between Odin, Loki and Thor was well scripted, with Loki being the jealous, conniving brother played out well on screen and Hopkins Odin being the loving but stern and protecting father. The scenes between Loki, Thor and Odin were well directed and did well to providing a backdrop to the tensions and differences between Loki and Thor. There were a couple of good action scenes where Thor’s abilities were showcased and none it looked cheesy, the special effects look good and the 3D helped to draw the viewer in.

The Earth scenes with Thor seemed a bit thin. You knew he was going to fall for Natalie Portman’s character and learn a “valuable” lesson during his exile on Earth, but it just seemed to happen too fast. Thor became self aware way too quickly for me and I would have liked to see Portman and Hemsworth’s characters have a little more one-on-one screen time to really solidify the relationship that becomes the reasoning for Thor returning to Earth to help protect it.

Another thing that was iffy for me was the final confrontation between Loki and Thor. It was cool, but I thought it could have been better. Hiddleston was so good as Loki and was spoken of as the “Master of Magic”, yet he didn’t seem to pose a problem for Thor. This was pretty much the same issue I had with the main villain fights in Iron Man 1 and 2.

Those were pretty much the only things that bothered me in an otherwise solid offering from Marvel. I would recommend this movie and suggest you check it out in Imax3D, although you can still enjoy the movie if you don’t.

(Oh and like most Marvel movies, there is a scene after the credits)

Watch the Thor Trailer below