Aaron Hernandez, born in Bristol, Connecticut on November 6, 1989 was a star tight end for the New England Patriots from 2010-2012. He seemed destined for super-stardom in his years in the NFL. However, this great football player will go down in history more for crime than catching touchdown passes for the Patriots. Today, Hernandez was found guilty of murdering Odin Lloyd, along with some gun possession charges. 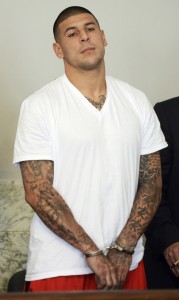 His penalty is life imprisonment, and that doesn’t count another case he has pending for an even older shooting. We can call Hernandez’ career a wrap. The saddest thing about this case is how much he could have accomplished in life and in the NFL had he avoided doing such stupid acts. Had none of this happened, he may have had a Super Bowl ring this year, as his former team, the Patriots, took the most coveted title in Football. Hernandez could very well have done some memorable things on the field if not for his conviction.

Ultimately, life will go on, but for Aaron Hernandez, and his loved ones, one can only wonder what could have been. He could have drawn an easy multi-year, multi-million dollar contract from any team in the NFL. He had a fiance’, who cried in his mother’s arms following the conviction. The fact of the matter is, this former NFL star took a life, and perhaps others as well. Instead of leaving behind a legacy, he will always be an example of what not to do. One of the jurors was quoted saying “we did the right thing”. Unfortunately for him, instead of celebrating great seasons, winning Super Bowls, and breaking NFL records, he will spend his life in a cell, wishing he could reverse time and do it all over.