Are Hip-Hop Fans The Hardest To Please?

admin June 2, 2015 Comments Off on Are Hip-Hop Fans The Hardest To Please?

Hip-Hop fans are the hardest to please.  They are the most critical fans out of all genres of music.  No matter what new artist comes out, there will be those Hip-Hop fans look at them as the ‘anti-christ’ of rap.  For instance, take Fetty Wap.  His lyrics are wanting, he has a sing-songy style, and he has one eye. Some Hip-Hop fans seem to think Fetty is the latest artist that is supposedly going to ‘bury the culture’.  But is Fetty Wap really bad for the culture? He’s not doing anything Nelly didn’t do about a decade ago.  He’s just making music that is hot for the moment.

There was a time when the “backpack” movement used to harshly criticize everything about mainstream music.  They hated the flashy imagery, the violence, even rap songs with R&B hooks.  However, Hip-Hop is growing strong today.  Hip Hop is simply what it’s fans make of it.  NWA came out in 1987 and revolutionized Hip-Hop, but before then, it was still fun music.  All NWA did was popularize violence and sex in the music. They ushered in the “Gangsta rap” era.  Back then, people thought Hip-Hop was just about over.  Then, in 1994, Bad Boy introduced Hip-Hop to flashy braggadocios bravado, and fans sure thought the end was near.

Hip-Hop is an ever-evolving art-form.  Today’s Hip-Hop now encompasses a wide variety of sub-genre’s ranging from “Gangsta” to “Flashy”, from “Trap music” to “Conscious rap”.  Some artists even fuse different Hip-Hop styles.  Hip-Hop has always pushed the envelope and molded what is acceptable. It doesn’t ask for permission to try something new, it experiments, it revolutionizes, it re-creates itself, it changes.  As Hip-Hop changes, there are always going to be fans of the previous age criticizing it for what actually makes it great: Evolution. 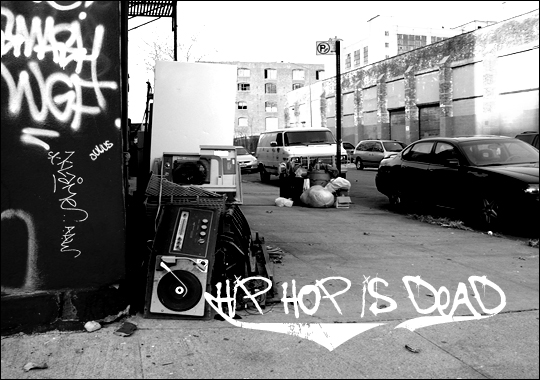