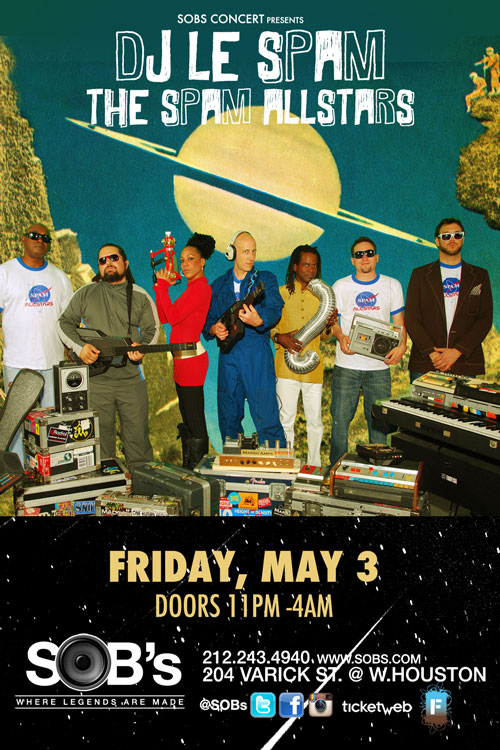 Spam Allstars are a United States nine-piece Hip hop, Latin, funk, and electronica band from Miami, Florida. The band has been described as “road warriors” because of their busy touring schedule. The band has performed at many music festivals including High Sierra, Langerado, Wakarusa, Montreal Jazz Festival, Harbourfront Centre, Santa Monica Pier, andSummerstage. Spam Allstars also recorded an album, The Illustrated Band, with Page McConnell side project Vida Blue,[1]in addition to being featured on Vida Blue’s DVD Live at the Fillmore. [WikiPedia] JMN Says: It doesnt matter what genre you listen to, this band has it all, so take us up on the offer and make sure you’re there May 3rd! JMN always promotes the best so trust us! Tickets also available at SOBs.com!

FOR ALL OF THESE SHOWS, LISTEN TO YOUR LOCAL COLLEGERADIO STATIONS, AND FOLLOW JMNLive on Twitter or DynastySR77 to win tickets! YOU CAN ALWAYS BUY AT WWW.SOBS.COM!