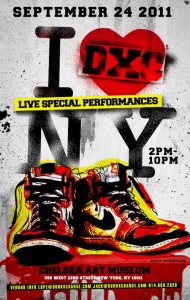 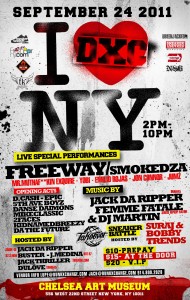 This past Saturday the GoodFellaz did their thing and held it down at Dunk Xchange NYC.  The longest running tour in the country made its stop this weekend at the Chelsea Art Museum, but has reached kicks enthusiasts worldwide, hosting events from Miami all the way to Honolulu. With more snapbacks and graphic tees than you can count, the 8 hour sneakerhead extravaganza was popping from start to finish. Deemed as “sneaker wallstreet” fanatics are given the chance to buy, sell, and trade their fav kicks for the next.  We’re talking Jordans, Air Max, Nike Dunks, all that! The showstopper of the night though?? Hands down….those Nike Mag’s!!  CRAZY to peep those in person!

In addition to the sneaker madness taking place many vendors set up shop displaying their hottest in apparel & accessories.  Our friends from Takeover in Jersey, Fly Kicks, Blaze That Ish, and BKLYN Stickup were all in attendance.  Hip hop played its part of course while DJ’s rocked throughout the day, and performances from Freeway, Smoke Dza, and up and coming heat Jon Connor and Emilio Rojas blazed the stage.

Dunk Xchange once again was a great success.  The best in  fashion, art, and hip hop all rolled into one.  What more can you ask for?  If you didn’t get a chance to make it out, be sure you make it to the next one! Tell em the GoodFellaz sent you!