It looks like Eminem is still able to move some serious units!

According to industry insiders, it appears that Eminem is set to make a huge impact on the Billboard Charts with the debut of his latest album “The Marshall Mathers LP 2”, which is predicted to sell between 700,000-750,000 copies in first week sales. If these projections are accurate, Em would have secured the #1 Album in the country, as well as the second-largest sales week of the year, surpassed only by Justin Timberlake’s “The 20/20 Experience”, which opened with 968,000. It would also knock Drake to the third-best debut of 2013; his recent “Nothing Was The Same” album moved over 658,000 units in its 1st week sales.

If these projections (which include data from retailers and digital sales) are accurate, this would be Eminem’s 7th #1 Album, and would be on pace with Slim Shady’s last LP, 2010’s “Recovery”, which moved 741,000 copies in its first week.

The official sales numbers for “The Marshall Mathers LP 2” will be announced on Nov. 13th. Stay tuned to GoodFellaz TV for all the latest industry info and sales projections! 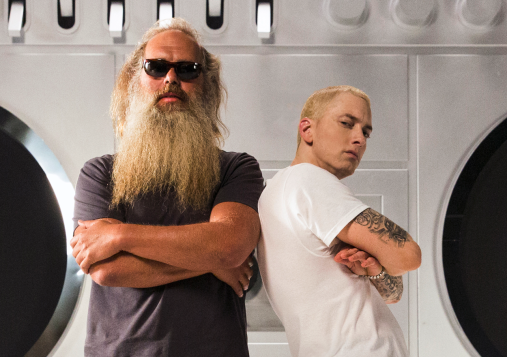 Listen to the GoodFellaz TV “New Heat of the Week” from Eminem “Rap God” below! This is the newest single from Eminem’s upcoming “Marshall Mathers 2” LP, which is scheduled to drop November 5th on Shady/Interscope Records. What do you guys think about this record, feelin’ it?

It looks like Eminem is taking it ‘back to the basics’ for his next album. Check out the Track-list & Album Cover for Eminem’s upcoming “Marshall Mathers 2” LP, which is IN STORES NOW on Shady/Interscope Records. Featuring the lead single “Berzerk”, and executively produced by long-time collaborator Dr. Dre & the legendary Rick Rubin, Em’s new project is one of the most anticipated albums of the year. What do you guys think about the album artwork, feeling it?

Check out the New Eminem “Berzerk” video below, off of his upcoming new album “Marshall Mathers 2” LP, which is IN STORES NOW on Shady/Interscope Records.