Jim Jones Talks “C.A.P.O.” & VH1 Show while In the Studio with GoodFellaz TV 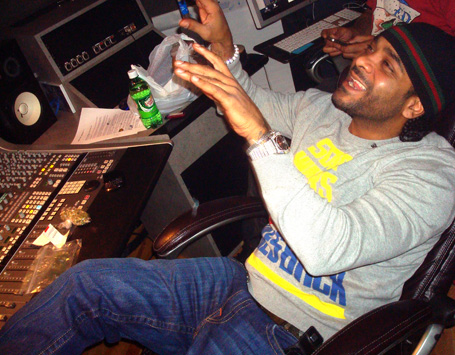 Recently GoodFellaz TV was in the studio with Jim Jones for a private listening session where he debuted tracks from his New Album “C.A.P.O.”, in stores now. Surprisingly this project, which is his 5th Studio album, is NOT on Sony Records, with whom he had signed a multi-million dollar contract with over 2 years ago. Instead, the new album is being distributed by his longtime label home E1 Records (formerly Koch).

With plenty of Grey Goose and Kush flowing in the studio, a heavily intoxicated Dip Set Capo previewed songs off the new album, which had an overall different sound from his previous albums. Noticeably absent were the numerous Diplomats guest appearances that we had come to expect from a Jim Jones project. Whether this was an indication that things were still not the same amongst the formerly-tight Dip Set crew, or rather just Jim’s attempt to focus more upon his own musical abilities we can not say. However, he does have an impressive roster of guest appearances including Cam’ron, Juelz Santana, The Game, Raekwon, Lloyd Banks, Prodigy, Ashanti & Wyclef Jean, among others.

Moving away from the “soul-sample” heavy beats that were once the Diplomats trademark, Jim Jones instead relies upon a more diverse beat selection for the new project. Also noticeably absent as well was the “Max-B swag” feel that had defined Jimmy’s last couple of projects. The new sonic arrangement on the “C.A.P.O.” album was a pleasant surprise, showcasing a more polished and confident Jim Jones sound.

In addition to his current single “Perfect Day” featuring Juelz Santana and Logic, other standout tracks include “Getting To The Money” (f/ Cam’ron), “Carton Of Milk” (f/ Game), & “Let Me Fly” (f/ Rell). Jim Jones also spoke on his New VH1 show, as well as the recent Dip Set reunion.

Overall, the folks at GoodFellaz TV were pleasantly surprised by music from Jim Jones New Album “C.A.P.O.”. We recommend it to any fan of east-coast hip-hop, and it definitely sparked our interest for the upcoming Diplomats reunion album as well. Check out the exclusive GoodFellaz TV footage below, live in the studio with Jim Jones.