Is the Music Industry back in business??

By now we’ve all heard the stories. The Music Recording business, among one of the first (and hardest-hit) industries to be affected by the ‘digital revolution’, showed some ‘signs of life’ recently, reporting that overall sales rose slightly last year for the first time since the millennium. Mostly spurred by new digital revenue streams, ‘music biz’ industry insiders finally had something to be smile about, raising hopes that a recovery might finally have begun.

The increase in sales was miniscule in nature, with only a slight 0.3 % bump in revenue; however it was the first time since 1999 that the industry experienced any sales growth at all. According to the International Federation of the Phonographic Industry (IFPI), who monitor and report on the financial health of ‘the biz’, the Recording Industry generated a little over $16.5 billion in 2012; Not too bad, right? Wrong! This figure is actually peanuts compared to the $38 billion that the industry once raked-in at its height. However the growth, no matter how minute, was at least something to take encouragement from.

After all, ‘the biz’ has been taking a beating for years now!

The ‘Digital Revolution’ was in full swing.

With the advent of illegal downloading and file-sharing, robust competition from other entertainment sources (Video Games, the Internet), and technological trends that often made purchasing ‘physical copies’ of albums increasingly obsolete (iPods, Smart Phones), it seemed as if the music industry’s prognosis looked terminal. Record companies were caught in a seemingly unending downward spiral; their attempts to come up with a digital business model that could compete with file-sharing technology seemed doomed for failure. Record labels were firing employee’s left-and-right. Music stores were dropping like flies. The future on the industry seemed bleak.

Then something new started to happen. The Music Industry finally started to figure it out. And the trend that had at one time threatened the very existence of ‘the biz’, slowly started to become the very same thing that was bringing it back. Maybe even became the industries salvation.

In 2012 digital sales and other new sources of music-revenue grew. They actually grew enough to even counteract the steady decline in physical CD sales.

“At the beginning of the digital revolution it was common to say that digital was killing music.”

Now, according to him, it could be said that:

How did this happen? And what exactly is ‘Digital Revenue’? 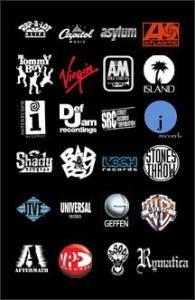 ‘Digital Revenue’ comes in several forms. There’s Digital Download revenue, which consists of sales of downloaded singles and albums, using services including iTunes & Amazon.com. This sector of the market has been booming in recent years, with hundreds of millions of purchases each year. And then there’s ‘Music Streaming’, a promising new frontier for the industry, which offers subscription-based way to listen to music without actually purchasing a song or album. Subscription-based services including Spotify, Pandora, and Rhapsody are helping to generate additional revenue, with a growing membership that grew by 44% alone last year, with an estimated 20 million subscribers according to the IFPI.

Several new entrants into this emerging market are expected soon, with similar ‘streaming’ services from industry ‘big dogs’ Apple and Google in the works, thus promising even more subscriber fees and licensing revenue for the record labels. Combine these lucrative digital money-makes with expanded avenues of musical revenue from performance-based royalties and strategic cross-promotional uses music ventures, and suddenly the fortunes of the industry don’t seem quite so dire.

Now when we speak of an increase in sales, it’s important to remember these numbers reflect world-wide revenue.

In the US, music sales still declined slightly in 2012. However several independent fiscal projections for 2013 seem to predict a turnaround beginning this year, with anticipated revenue rising to $5.35 billion from $5.32 billion. The bright-side of the ‘Digital Music Revolution’ is that the increasing shift to digital delivery of music will lower the record companies’ costs. A download requires no further production or packaging costs, thus increasing profits via reducing overall spending. 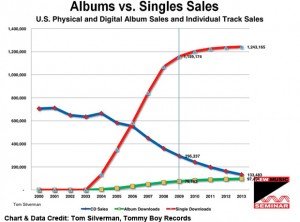 It took the record companies a while to figure the ‘Digital Music Revolution’ out. At first, the labels were extremely reluctant to entertain the notion of ‘digital distribution’, viewing it as more of a threat (illegal file-sharing). But now they seem to ‘get-it’. As of last year, the global music business generated 34% of its revenue from digital sources, substantially more than any other type of media including books, magazines, movies or TV. That’s over ONE THIRD of total world-wide music sales, not bad at all. In United States, digital sales now make up more than HALF of all music revenue. How the tides have turned! And who know, had the music industry been more open to change earlier on, things might have turned around even sooner.

So now the writing is on the wall: Digital is here to stay! It looks like the ‘Music Biz’ finally gets the big picture. Lets see how things shape up in 2013, it could be a good year for the industry after all. Stay tuned. 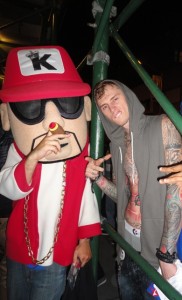