Here it is folks, my first official NFL Draft Top 10 picks list the way I think they should and might happen. Can’t front, I had a blast putting this together. Free free to agree or destroy my picks as you see fit lol…Granted I didn’t take into account trades, which I’m sure will happen. Anyway, enjoy.

I know this appears to be the obvious answer as JC is being labeled the “can’t miss” product of this year’s draft. He’s been compared to Bruce Smith, Lawrence Taylor, and Julius Peppers to name a few and at 6’6 / 266 lbs with a 4.5 40 time can you blame teams for getting wide eyed. Though his dedication and work ethic have been questioned in recent weeks, I still think he’s the pick for Houston. Even though I think his skill set is more favorable in a 4-3 defensive system, in a 3-4 defense he could still be dominant playing the Aldon Smith/Demarcus Ware role. Yes, Houston needs a QB, Keenum and Fitzpatrick are not long term answers and Bortles was #1 in a lot of mocks, but with several serviceable guys available at the top of the second, I don’t think you want to be the team that passed on the next “_____”. This is the pick unless Atlanta finds a way to trade for the number 1 overall, which remains to be seen.

Most mock drafts have this selection as a lock and I won’t argue with this pick. Sam Bradford aka Mr. Glass is as fragile as they come and with two picks in the 1st round, keeping your franchise QB healthy for at least 5 games this season can’t be frowned at. The Rams ‘O- line’ has dealt with injuries lately and getting another healthy body on there is a need. Now while I believe Sammy Watkins should be the pick, giving the Rams a true #1 and going ‘O-Line’ later in the draft, adding Robinson to the rotation with Saffold and Barksdale is an instant upgrade.

I had Sammy Watkins pegged to go here because Chad Henne was serviceable last season and with Justin Blacmon suspended for the 2014 season and the loss of Jones Drew, Cecil Shorts is your only weapon so improving the offense is a must. Now I know the wide receiver pool is deep this year, but you just don’t pass on guys like Watkins, unless there’s another flashier option available. Enter Johnny Football. It’s no secret that Jacksonville needs to put some butts in the seats and give their fan base something to cheer about and buy tickets for. After bombing out on the Blaine Gabbert pick, owner Shaad Khan has already stated the Jags were going to draft a QB. Why not grab a person who’s guaranteed to increase your ticket sales, energize your fans and maybe actually get one or two of your games off the blackout list. 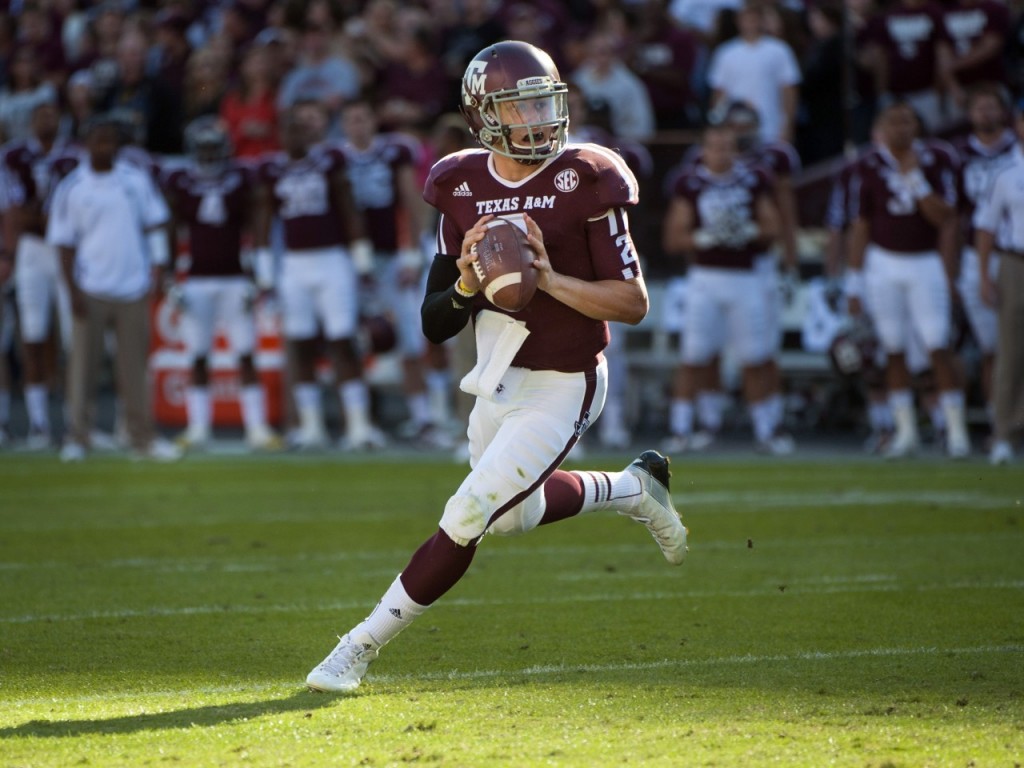 I originally had the Browns taking Manziel, but I don’t think the brass believe in his abilities being able to carry over to the NFL level. While there’s no doubt in my mind they are going to draft a QB at some point in the draft, they don’t do it here, not with Watkins staring them in the face. I think pairing Watkins with Gordon, Cameron and newly signed Tate out the backfield gives Cleveland fans something to legitimately get excited about for once. Besides, I think the Browns like Derek Carr (Fresno State) who may be available when the Browns pick again around 26.

Okay, I know most mock drafts would put Khalil Mack in this position, but the NFL is a passing league now and the Raiders just acquired Matt Schaub and coach Dennis Allen is very high on his ability to take the Raiders to the promise land. The problem is who is he throwing to? Denarius Moore is a #3 WR at best, Rod Streeter is not much better and James Jones is not a #1. Schaub had the most success in Houston when Andre Johnson was at his healthiest. I think the Raiders give him the big physical target and #1 WR this teams needs to seriously compete. Sure you could always work on building your defense, but the Raiders had two 100+ tackle LBs in Burnett and Roach and with the #4 pick in the second round, they will still have many solid options available to address that need if they see fit. Many don’t think Evans will go this high, I think he should if Oakland is serious about competing.

I’m pretty sure that Atlanta is serious about trading up for the #1 spot and drafting Clowney, but if not they get the next best defender in Khalil Mack. Atlanta needs help at LB and DE and Mack can pretty much do it all. He’ll most likely end up a DE in the Falcons 4-3 defensive scheme, but he could easily play the OLB role if needed. The Falcons get the edge rusher they’ve been hoping for and that defense gets a boost in a very pass happy division. 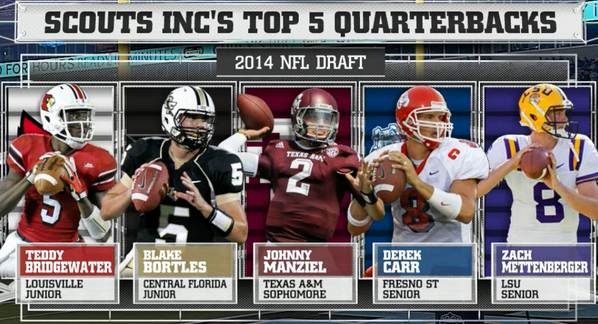 Not really sure what Lovie Smith and company do here. I’ve heard Mike Glennon is on the block if they’re able to get a 2nd rounder for him and they draft a QB. I think Mike Evans would have been the pick, but I don’t think he’s here for them. Mack would have been a great pick but he’s also gone. I like Anthony Barr here to play opposite Lavonte David, giving Smith those athletic LBs he loves but I think it’s too high to draft him. So, I’m going to go safe and say Matthews is the pick. Why not strengthen an already talented ‘O-Line’? This gives them more protection for McCown and more holes for Doug Martin to run through, you really can’t go wrong with this pick.

Ponder/Cassel just aren’t the answer in Minnesota, point blank. They are serviceable at best, but on a team that in my opinion is a solid QB away from making some real noise, you need a franchise signal caller. Bortles size and strong arm will keep defenders from stacking the box against Peterson and allow Patterson, Jennings and Rudolph to actually matter (lol). I think Bortles is calling the shots next season under center.

As much as I hate to write this, because I’m a Giants fan, I see Ebron going off the board here. Buffalo drafted EJ Manuel last year in the 1st round and he showed some flashes before getting injured. I think the Bills continue to surround him with talent on the offensive side of the ball. Scott Chandler was serviceable, but Ebron gives Buffalo a genuine match-up nightmare over the middle of the field. Now at the same time because Matthews and Lewan are still on the board, there’s a chance here that Buffalo decides to sure up the ‘O-Line’ to protect their investment in Manuel for years to come. Then again that could just be wishful thinking on my part lol

I think Detroit knows what division they’re in and they need to be able to stop the pass. Gilbert is tall and fast and will give the Lions some size options in dealing with the passing offenses in Green Bay, Chicago and Minnesota with their new strong armed QB. I’ve read the Lions are quite serious about trading up for the talents of Sammy Watkins, which would be a scary match-up for defenses in the NFC North, but until I see it, I say they sure up that awful
secondary. 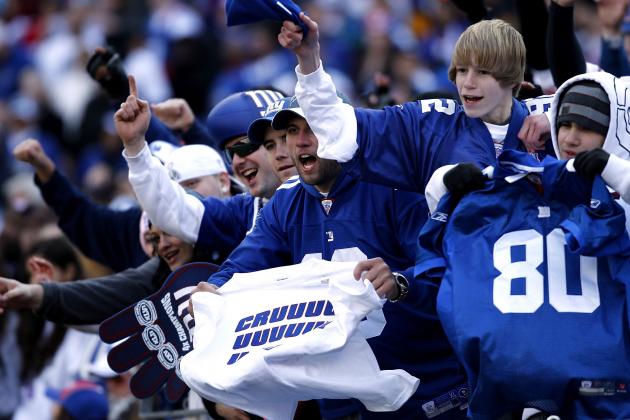 I know this is a top 10 list, but just because I’m a Giants fan I have to address my squad. If things pan out the way I called them in the draft, we are out of the Ebron/Evans race, so we still need to address the offense. I don’t believe the Giants draft a OL here for the following reasons. We have a lot of money tied up in Beatty and even though he’s coming off an injury, he’ll get the chance to redeem himself from a very terrible year. Prior to this year he was a decent OL, let’s hope the new scheme gets him back to form. Second reason is because we signed Charles Brown, a starter for the Saints last year as backup in case Pugh or Beatty goes down. Yes, Taylor Lewan or Zach Martin (OG Notre Dame) are the picks everybody is penciling in for the Giants I think we go defense here and draft Aaron Donald DT out of Pittsburgh.

I think Donald is the pick because the Giants defense is predicated on the pass rush. With JPP hopefully returning to Pro Bowl form, Hankins coming into his second season as a starter and Demontre Moore waiting in the wings, a pass rushing DT like Donald would give the Giants a ‘D- Line’ to take notice of. Especially with the CB tandem of Thurmond, Amukamara and Rodgers-Cromartie we can actually cover wide receivers for once giving time for Fewell to draw up some creative blitzes and cause some damage. While I wouldn’t be upset if we drafted Lewan or Martin, I think the Super Bowl this year has shown us that the old saying is still true.

For more Ecclecticity, check out Dav Noble’s Blog “Welcome To Ecclectica”, click the Link below: