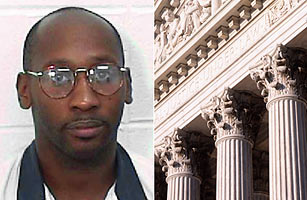 Troy Anthony Davis is yet another victim of Amerikkka’s assault on Black men.  Although there is no DNA evidence supporting his guilt, just a mere accusation by the actual gunman, the fact that the victim was a police officer, and Davis being “African-American” was enough to put the man on Death Row.  After a plethora of evidence has been unearthed, 7 out of the original 9 witnesses have either changed stories or completely recanted their testimony.  The fact is; there is not enough evidence to condemn Troy Davis to death.

On August 19, 1989, Troy Davis, acquaintance Red Cole, and another were harassing a homeless man in Savannah, Georgia outside a Burger King.  Red Cole pistol-smacked the homeless man, and officer Mark Macphail ran to the rescue.  Red Cole shot the officer dead.  Then, Red Cole pointed the finger of blame at Troy Davis, who returned the favor.  Subsequently, most of the witnesses that implicated Davis have either been discredited, recanted, and some even pointed the blame at Coles.  Although there is no DNA evidence to sway culpability either way, there is more than enough reasonable doubt to exonerate Davis.  Davis is apparently being made into an example for any black man who is even in the vicinity of a cop getting murdered.

We can’t look at Davis as a poster boy for innocence, since he did partake in the homeless man’s harassment, however it is clear that he did not shoot Officer Macphail.  Davis has a wealth of supporters, including former prosecutors, politicians, and witnesses.  Despite all this, he is set to be executed today.  After all, he is a black man in Amerikkka, so why shouldn’t he be picked on?  Had he been caucasian, it is quite likely that any semblance of reasonable doubt would have sufficed to set him free, but not in his case.  The United States’ legal system works for everyone with the exception of Blacks and Latinos.