It’s a race to a ‘Billi’, and some of Hip Hop biggest starts are closing in on the coveted $1 Billion mark.

According to Forbes Magazine, who recently released their annual ‘Top 5 Wealthiest Hip Hop Artists of 2014’ List, the top 5 biggest ‘ballaz’ in Hip Hop are:

Diddy once again takes the #1 spot, with an estimated fortune of $700 Million, an increase of $120 Million from last year. The change comes largely from his stake of the mega-successful Ciroc liquor brand, and the addition of Revolt TV to his impressive portfolio.

Coming in at #2 this year, knocking Jay-Z down a notch, is the legendary Dr. Dre. The D-R-E has an estimated $550 M’s in his bank account, climbing on the list due to the success of his Beats By Dre empire, which he co-founded with Interscope CEO Jimmy Iovine back in 2008, and now boasts an estimated $1 Billion in annual sales. Jay Z comes in at third place this year with an estimated $520 Million in the stash, raking in even more cash this year with his Samsung/ “Magna Carta Holy Grail” album deal, a world-wide tour, his ROC Nation imprint, and the success of his sports management company who most recently secured a $240 Million contract with Baseball super-star Robinson Cano.

Rounding out the list #4 is Bryan “Birdman” Williams with an estimated $160 Million, his split of the Cash Money empire he shares with brother Ronald “Slim” Williams. The duo cofounded Cash Money Records over two decades ago, and currently sports an impressive roster of super-star artists including Lil Wayne, Drake, and Nicki Minaj, as well as other successful ventures including GT Vodka, and their YMCMB & Trukfit clothing-lines. 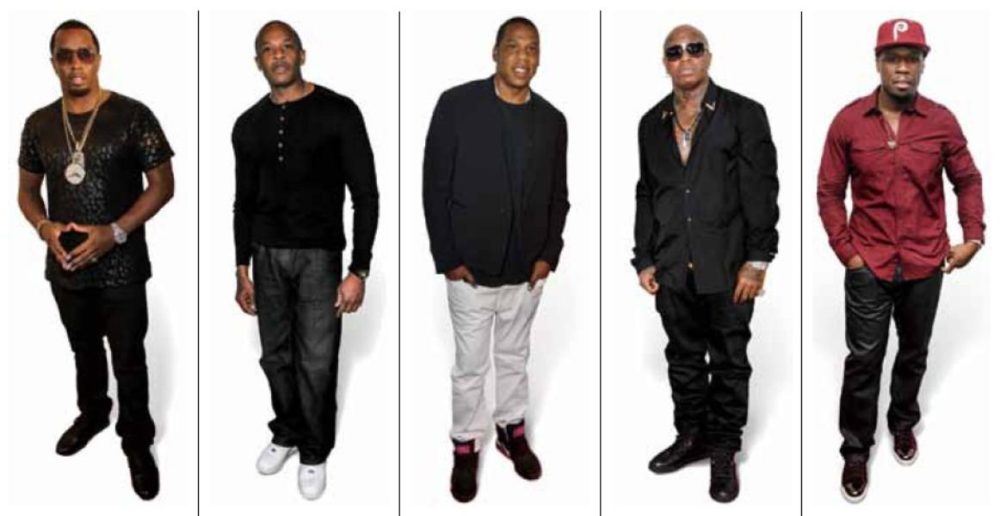 At the #5 spot is 50 Cent, who owes most of his fortune to the success of his first couple of albums, G-Unit clothing line, and his $100 Million Vitaminwater pay-out in 2007. His currently business ventures include SMS Audio and SK Energy drinks. Fif has also recently shaken up his G-Unit record label, leaving long-time partner Interscope Records in favor of the independent route, and also disbanded the group G-Unit. He is set to release a new album “Animal Ambition” in June.

The ‘Forbes Top 5’ list takes in to account each artists past earnings, current holdings, and other investments, and can be found in the May 2014 issue of Forbes Magazine. So on behalf of the GoodFellaz, congratulations to each artist on the list, their moves are truly inspirational to people across the globe. Now let’s see who will become the first Hip Hop Billionaire. Who do YOU think will make it there first?